After a bit of a drought, the last 6 months have been great for the "artful euro". I've played quite a few that have kept me coming back for more: Escape, Qin, Il Vecchio, SewerPirats, Nieuw Amsterdam,  Mutant Meeples, Copycat, Panic on Wall Street (née Masters of Commerce). One of the most pleasantly surprising has been Ginkgopolis.

Ginkgopolis is one of those interesting, multifaceted games that while it's not terribly complex it defies easy pigeonholing. The conceit is that we're eco-friendly urban planners building a city by laying tiles onto a square grid, and we can build either outwards (urbanizing by adding tiles to the edge) or upwards (adding new floors on top of existing tiles). Where you can play is driven by your hand of 4 cards, drawn from a deck which contains all the visible buildings in the city plus 12 border spots for urbanization. Each turn players secretly and simultaneously play a face-down card and optionally a tile, which fully specifies their action for the turn, and then resolve in turn order. Each action gains you resources: more tiles to play, victory points, building ownership markers, or cards to add to your tableau which may provide bonuses to future actions or endgame points. 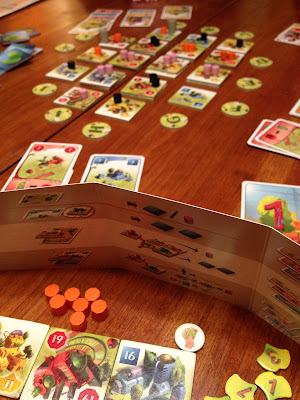 There are multiple strong tensions which affect every decision you make in the game, which is what gives Ginkgopolis its immediate pull. One familiar one is the tension between building an engine, scoring points, or gaining needed resources. Whenever you Build a Floor – play a card for an existing build to put a new tile on top of it – you get to take the card you played and add it to your tableau. The card can give you bonus resources when you take one of the three categories of action in the future (Urbanization, Build a Floor, Exploitation) or endgame points, depending on the card's rank – low ranks provide powers, high ranks provide conditional victory points. The game system then makes it harder to grab those high-valued cards, because it costs points to build lower ranked floor tiles on top of a higher ranked one. The cards and tiles rank 1-20, so if you have the card for one of the starting buildings ranked 1-3 in hand you can play it along with any tile ranked 4-20 to add a floor, taking the 3 card for your tableau (it lets you draw an extra tile draw any time you add a new floor to a building). Say you play the 15 tile; the card for the 15 building will then be fished out of the reserves and added to the deck on the next cycle.

If you subsequently see the 15 card, if you want to add a floor on top of it and snag the 15 card for your tableau (it gives you 3 points at the end of the game for every building you own of height 3 or higher), you'll need to play a higher-value tile to do it without penalty. You can play something lower, but then you'll need to pay victory points for the difference, which can be painful in a game where victory points are relatively tight.

This leads to another of the game's key tensions: when do you play the powerful, high-ranking tiles? If you have a 20 tile you can use it to add a floor to anything without penalty, so you want to use it to grab a cool, high-valued card. But opportunities are made available by the random flow of cards and tiles, so are hard to predict. As the ranks go down (what about an 18? a 16?), it becomes trickier. You need to get something, you can't sit on tiles or any other kinds of resources forever without using them, and the perfect play is elusive.

For those big tiles, the ideal play may not necessarily involve snagging a good end-of-game scoring card. There are also big points at stake for controlling districts, groups of adjacent like-colored buildings. Getting high-valued tiles onto the board may be valuable for creating or joining up districts, or making them more painful to break up (because they are harder to build over).

While the Building a Floor move is the flashiest and most novel mechanic in the game, the other actions are just as important. Urbanization involves playing a letter card which matches an outside point on the city along with a tile, and it expands the playing field. While it doesn't allow you to add power cards to your tableau, it does score you resources (tiles, points, or ownership markers) to fuel your continuing growth, which Building a Floor does not by default. Exploitation allows you to play a card alone for some resources. All the actions can be buffed by cards in your tableau. In a recent game, one player built an Exploitation engine which turned what is superficially seems like the weakest action (it's really not, because unlike the other actions it doesn't require a tile to power) into such a strong victory point generator he could use it to clobber us. Crucially, Exploitation allows you to bury high-valued cards when you can't economically grab them because you don't have a good tile. After your turn is over, you're going to pass the rest of your hand to the left, meaning they get a good crack at any cool cards you didn't use.

I think one of the reasons people have found Ginkgopolis appealing is the remarkable elegance with which the game systems blend. For a game with 60 tiles (1-20 in three suits), 60 matching cards, 12 border tiles and cards, and three different actions types (Urbanization, Exploitation, and Building a floor), there is a lot going on here and there is real design elegance. While it will be baffling for a turn or two because it is basically abstract, once it clicks it really clicks. Players will ask rules questions ("what happens if I add a floor to a building that has already had a floor added this cycle?" "what happens if I have a card I can't play?") and I usually tell them to think about it for a second, and it becomes clear that these tricky situations simply can't occur – my preferred way for handling them. Everything in the game seems to work the way it does because that's the way it needs to work.

Thematically, Ginkgopolis is nominally about building cities in harmony with nature in a post-resource-exhaustion future, but it's mostly theme through nice art. This is not a terrible way to go, has worked before, and I think it works here. The nod to the unusual and distinctive ginkgo tree, a living fossil, is a nice touch and is effectively used in the art design. It's not a lot – the tensions in the game don't particularly make me think of urban planning – but you can't have everything all the time. It's because of this relative thematic abstractness that I wasn't sure how well Ginkgopolis would go over with my friends. It's been a pleasant surprise how well everyone has liked it, even those normally skeptical of lightly-themed abstracts.

While I think Ginkopolis doesn't quite fall into the same general box as the true classic eurogames (El Grande, Modern Art, Settlers) because of this relative abstractness combined with not immediately intuitive mechanics, this is still an old-school meaty euro in all the best senses of all those words. Streamlined systems, crisp gameplay, lots of tension, chaotic enough to provide replayability and ever-changing problems, and an elegance of design all point towards this have real staying power amongst hobbyist gamers.
Posted by Unknown at 11:15 AM No comments: